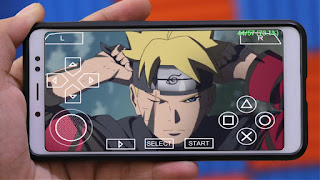 Naruto is one of the best and most popular anime in all animes. Most of the peoples want to play its original game because of his story and fighting mode. The Naruto series is based on the Child and his name is Naruto Uzumaki who does not have parents and his entire village hates him because a Demon Nine-tailed Beast is sealed inside him. Naruto wants to become The Hokage of his village so everyone respects him. Naruto and Naruto Shippuden is based on his life and the is no doubt this series is one of the best anime storylines.

After the naruto series, writers make the next part on naruto’s son Boruto Uzumaki. This series is new but many peoples want to play this game because of its characters. we see Naruto and his friends in this game and you can play them with their full power.
The Naruto Boruto game is not officially released for android so I will give you a Modded version of this game. make sure to read the full article for every detail.

This is a PSP game so you will see awesome gameplay with some good fighting moves. You will see all the boruto characters in their movies.

I already told you that this is a modded version of the naruto game so you also need a Naruto ultimate Game. I also give you a link to that game and also a moded file so you need to download both files.
Download

You Can also watch our Tutorial Video – Click Here

NOTE: If you face any problem we recommend you to Watch Our YT Video tutorial so you can install it without any problem.

This is not an official or Original Boruto Game but if you want to Play With boruto Characters then You Can Try this Game. This is a moded version of Naruto Ultimate Heroes. I hope you Download Naruto Boruto Next Generations PSP Game download for Android successfully.