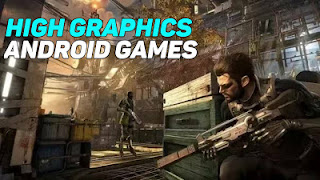 In 2020 Most of the Action Games are available on the internet but most of the Games do not have Best High Graphics. Graphics is one of the major features for making any game best.
Today I am going to give you a list of Some Best Graphics Android Games and all These Games have high-quality Graphics and eye-catching games. If you are a gamer and enjoy Game, You can try these Games and Most of the Games are Open-world and Action Games.
All Games are for Android/IOS and You Can find Most of these games are available on the Internet.

Below is the list of some of the best Graphics Games for Android and IOS.

Call of Duty: Mobile is one of the best Graphics Game for Android with 250M+ Download Globally. Call of Duty Mobile is a shooter game and this game developed by Activision and Android Version is developed by Garena.
When Call of duty released for android, it received huge success and becomes the largest mobile opening game in Android. You can fight with other players in multiplayer mode. You Can Play this game is free but some things are purchase by Real money. you can buy weapons and characters from COD Points and COD Points buy with real money.

This Game is one of the best Graphics Android Games and also COD Mobile always praised for its Graphics by Gamers and Critics.
READ ALSO: Best Ben 10 Games

Minecraft is a video game where players can create their own life with the help of objects and other things. This game is popular for its graphics and modes. Minecraft Gives you three different modes where you can create your own world, fight with zombies and Play with your friends. This is a paid Game on All Platforms Like PC, Android, and IOS.
Minecraft has the best graphics in the game and also this game is famous in all countries because of its Graphics and Gameplay. You can download it from the Play store.
READ ALSO: Dragon Ball z Games Android

Pokemon GO is a reality Mobile game, Pokemon GO developed and published by Niantic. This game also won an award of Game of the year in 2016. This game is also freely available on Google Play Store but this Game takes access to Your Location.
Go outside and catch the Pokemons in the real world. Find rare Pokemons and fight with other players. Participate in the Pokemon Leagues. You can also customize your Avatar in the Game. This game is downloaded by 500M+ all over the world.
READ ALSO: [BEST] Open World Games Android

Need for Speed is a racing video game franchise that developed the game from 1994 and all games have their own different features. You can see the most famous Supercars and you can compete with other players also.
Need for Speed developed some of the famous racing games with the best graphics. Need for speed always doing better in making a new game. You can see many tracks for racing in their games. Many missions also in the Game.

Asphalt 9 legends are one of the famous racing game for PC and android. Asphalt 9 game is developed and published by Gameloft. Gameloft is one of the best Gaming Company and famous for its Gameplay and Graphics in the Game.
You can see 52 Cars in the Game with Ranking S, A, and B according to Car Rarity and price. This Game has 3 Racing Modes with some amazing tracks for racing.
This game is available on Google Play Store for free. But You can purchase Game Money and Coins for Buying Cars and other stuff.

We tell You some of the best High Graphics Game that is available for Android and IOS. Most of the Games are free and few games are paid. You can download these games on Google Play Store.
Stay Tuned for more Best Game Lists!